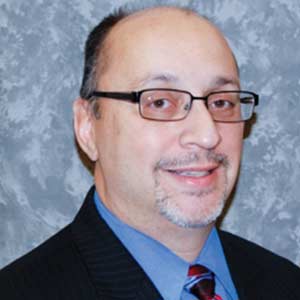 Jim Cimino is the Vice President of Technology at EVERSANA. He is constantly investigating how new technologies can be introduced and leveraged to improve user experience, engagement, and to solve business problems. Jim served as a contributing editor of Network Solutions magazine. He is the author of “Intranets: The Surf Within”, and “The Webmaster’s Guide to Lotus Domino”. Jim has spoken at several leading technology and learning &development conferences, and his conference proceedings have been published by NASA. Jim received his Bachelor of Science degree in Electrical Engineering Technology from Purdue University.

Facebook for Business states that, “Augmented reality (AR) and virtual reality (VR) are the future.” The problem is that we have been saying this for years. How can a technology that has been around for more than 30 years (Boeing researcher Tom Caudell coined the term ‘augmented reality’ in 1990) be considered “the future?” Business News Daily heralded 2018 as “the year AR hype becomes actual reality.”

We have seen growth in the use of AR/VR technologies in virtually (pardon the pun) every sector: healthcare, military, commercial and entertainment. According to Statistica, the worldwide market size for AR/VR is expected to grow to $18.8 billion dollars by 2020, and Allied Market Research claims it could be as high as $571 billion by 2025!

In simplest terms, AR is the overlay of information in the form or text, video, graphics or 3D models onto a live video feed. This can be done via smart phone, tablet or a dedicated headset. VR requires dedicated hardware in the form of a “wearables” (headset gloves, room positioning), and the “virtual world” is projected within the headset’s video screens, and provides tracking such that the users position within this environment reflects their movement. Because AR can be implemented on your smart phone, its adaptation is 4 times higher than VR.

Game-changing technologies usually need breakthroughs from either the consumer, healthcare, and/or the military sectors to achieve scale and popularity. Turns out, the first significant standout for AR global adoption came from the gaming industry, when Niantic launched Pokémon Go in July of 2016. To date, this has been AR’s “killer app”, and the game pushed AR into the public spotlight. During its early peak, daily Pokémon Go users in the U.S. numbered 28.5 million; global players were numbered at 45 million. Pokémon Go is generating nearly $200,000 of revenue per day, with a total revue of over $2.45 billion to date! Not too shabby! Yet, besides the enormous success of Pokémon Go, the commercial sector hasn’t really latched on to AR as we hoped it would.

Yes, there are notable examples that are often cited as AR “success stories”, including IKEA, Nike, Zara, PEZ, Coca-Cola, CoverGirl, Lacoste, Tesco, MTV, The New York Times, Converse and Kate Spade. Automotive manufacturers such as Audi, Kia, BMW, Hyundai, Volvo, Chevrolet, Mazda, Lexus, Jaguar, Mini, Mercedes-Benz, and Toyota have also jumped onto the AR bandwagon with features ranging from AR owner’s manuals to heads up displays (HUD). However, in order for AR to really be considered mainstream, there should be considerably more applications.

Developing commercial AR or VR applications requires specialized software, hardware, development tools and the associated skillsets to use them. The challenge for taking technologies such as AR/VR to the next level in overcoming these requirements. Specialized hardware creates a barrier to entry and adaptation. Special software, or if your “app” will  only run on a certain OS, then you have limited your market. And slow Wi-Fi connections can result in poor or glitchy performance, causing you user experience to suffer.

From the perspective of software development, you have three options to choose from

• Developing your solution at the operating system level

When developed at the operating system level, AR/VR applications tend to have the best performance. To achieve this, you need highly skilled developers who really know the platform and operating system-specific idiosyncrasies. This level of specialization is typically out of range for most small to mid-sized companies, and so they will usually identify a development partner to help them. Additionally, they may also decide on limiting their platform selection, as developing for iOS and Android can significantly add to the overall cost.

If you don’t go the operating system level route, you may opt for using a 3rd party development toolkit for your AR/VR projects. One solution, and an option that I have personally employed in the past, is to use the UNITY game engine. A game engine? UNITY has made a huge investment in AR/VR, and their partnerships and huge developer marketplace have made using UNITY a no-brainer.

There is a third avenue you can consider when developing AR/VR, and that is to use a 3rd party application, such as ROAR, Blippar, Zappar and the now shuttered HP Reveal to name but a few. These solutions typically provide a web-based GUI for users to upload their assets (images, text, video, audio and 3D models) and then allow the user to construct their AR/VR experiences.

These solutions utilize their own OS-specific app for users to publish their experiences to. While this is the easiest and often the most cost-effective way to develop and publish an AR/ VR experience, it is also the most limiting. Unless you need a basic AR/VP app (i.e. play a video or display text/images when a marker is recognized), then these solutions are probably not ready for prime time as far as the commercial sector is concerned

Hardware is another limiting factor in terms of the widespread adoption of AR and VR. In the past, VR headsets required a tethered connection to a dedicated PC. Hardware headset such as Oculus Go, HTC VIVE, Magic Leap and Microsoft HoloLens are making significant inroads in terms of performance, pricing, and freedom of motion.

According to SingularityHub, “We are about to witness the rapid rise of a standalone and highly mobile VR experience economy.” In a recent post about the future of AR and VR from Facebook’s CEO, Mark Zuckerberg said: “While I expect phones to still be our primary devices through most of this decade, at some point in the 2020s, we will get breakthrough augmented reality glasses that will redefine our relationship with technology.”

And finally, we need the address the issues of bandwidth.

According to a recent “Call for Papers” from the IEEE Journal on Selected Areas in Communications, “the number of IoT devices will reach 20.8 billion by 2020” Since the trend in AR/VR is to use smartphones and untethered headsets, we are going to need to have fast and reliable WIFI service at the point of need. According to ZDNet, “The low-latency properties of 5G offer promise for AR and VR applications…” Verizon began its public rollout of 5G technology in the United states in 2019, but this 5G implementation is “focused on providing improved download and upload speeds, as well as moderately lower latency compared to 4G LTE.”

The real benefits to AR/ VR will be the implementation of the Ultra Reliable Low-Latency Communications (URLLC) component standard anticipated for formal publication by the 3GPP (the standards body responsible for 5G NR) in Release 16, scheduled for mid-2020. Reducing latency speeds will improve the overall AR/UR user experience, since high between action and response (as in head movements within VR headsets) can result in motion sickness. Data costs will also factor into the AR/ VR adoption equation. In the US, mobile plans touted as ‘unlimited’ are typically throttled after 22GB. Mobile contracts will need to be more permissive to allow for more data consumption.

There may be light at the end of the proverbial tunnel.

We are seeing companies such as Microsoft, Google and Apple continuing to make significant investments in both hardware and software. In fact, Microsoft has over 10,000 patents in the AR/VR space!16And if you think of when Apple first introduced the iPhone back in 200717, the technology has improved by leaps and bounds. The introduction of ARKit in 2017 as an integral part of their platform means that Apple sees a tangible revenue stream for AR. Google announced its AR/VR platform, ARCore in 2017, and continues to evolve the technology to scale it across the Android ecosystem. Additionally, ARCore can support devices running iOS 11.0 or later!

Google may be the company that brings the first commercial “killer app” by bringing AR to search. If you think about it, the real core apps for the internet and mobile computing have as been search, email and chat. Search is pretty much ubiquitous with the Google name, even though there are other internet search providers: you typically say “Why don’t you google it” instead of “Why don’t you Bing it.”

According to Markets and Markets Research, “The new features in google search use a combination of the augmented reality, computer vision and camera to superimpose information and content onto real space.” By integrating AR into a Google search, Google may alleviate the hardware and software barriers to entry for augmented reality.

Brilliant, but we will now just have to wait and see.

Unlocking the Value of Connected Cars

Comprehensible Distribution of Training and Information...

The Current Focus is On Comprehensive Solutions

Big Data Analytics and Its Impact on the Supply Chain

Carmax, the Automobile Business with IT at the Core

The CIO's role in rethinking the scope of EPM for...

Transformative Impact On The IT Landscape

Get Ready for an IT Renaissance: Brought to You by Big...

Technology to Leverage and Enable

Speed is the Name of the Game

Rewriting The Rules On Global Payments With Localized Payment Methods

Marketing & Sales Technology In B2b –An Overlooked Accelerator For...

However, if you would like to share the information in this article, you may use the link below: